Quito – The splendid church of the Company, Jewel of America

My recent trip to Quito , the first time I visited Ecuador , had a clear objective that stood out above other expectations: see the interior of the famous church of the Society of Jesus .

And I will tell you that remembering the visit while preparing the images to publish this article, I was still amazed.

The great patrimonial importance of the historic center of Quito , the largest and best preserved of the colonial era in America, made it worthy of being the first place declared a World Heritage Site by UNESCO , back in 1978.

And within this heritage, the most prominent place is occupied by churches.

After touring inside the church of the Company , it is easy to understand why it is the most visited church by tourists in Quito.

Can you imagine the interior of a large church all covered in gold? walls, ceilings, columns, chapels … It’s amazing.

The church of the Company is the masterpiece of baroque in Latin America, and is known as the Jewel of America .

Church history of the Company

Started to build in 1605, it took 160 years to be completely finished.

You will recognize it by its unequivocally Baroque façade, which follows the style of the Jesuit churches, whose main sample is the Church of Gesu in Rome , although with a rather more ornate decoration.

The intention of the Jesuits on arriving in Quito in 1586 went beyond the construction of a church.

For that reason in 1622, in a building annexed to the church they raised the building of a university, which at the present time is the headquarters of the Metropolitan Cultural Center .

The church of the Company is the best example of Quito’s Baroque style , although given its long period of construction, it also mixes other styles such as Renaissance, Mudejar, Neoclassical or Churrigueresque.

What to see in the visit of the church Company

Since it is totally forbidden to take photos inside this church, thanks to the collaboration of Turismo de Quito we had the exceptional opportunity to visit it before its morning opening, at 9.30 am.

When you enter the church, which in our case was completely empty of visitors, you will not be surprised by its size.

Let me explain, it is a large church, whose vault of the central nave is 26 meters high; what is going to leave you amazed is to see it completely covered, golden!

Well, it is indeed a gold leaf cover , with thin sheets of 23 carats in every inch of the church.

It is estimated that in total it should conserve up to one ton of gold.

This was the way that the Jesuits had to try to attract the Indians to come to church and thus assume the Catholic religion.

The gold was contributed by the indigenous families who thus ” bought ” places so that their children could go in the future to the new Jesuit university that was later built.

The church has the characteristic Latin cross configuration, with a transept, central nave and two aisles with a succession of chapels.

In the architecture of the Company’s church, symmetry prevails.

In one of the chapels of the transept is also dedicated to Saint Ignatius of Loyola , the founding saint of the Society of Jesus .

For its part, the remains of Mariana de Jesus , the first Ecuadorian saint, are preserved on the altar .

In the other chapel of the transept, if you notice, you will notice the important difference of the brightness of the gold in the part of the balcony with respect to that of the altarpiece.

That area suffered a fire not many years ago, so it had to be restored.

To highlight also the numerous artistic works that are distributed throughout the church.

The main ones, the great canvases of The Last Judgment and The Hell made by Hernando de la Cruz in 1620.

And also worth noting the 16 paintings of the prophets by  Nicolás Javier Goríbar in the eighteenth century, which are distributed by the large columns of the church.

In short, a spectacular visit that just to make it worth traveling to Quito .

On Fridays the church closes for visits at 5.30. 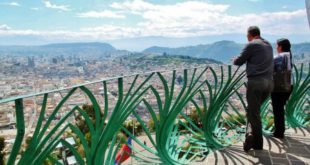 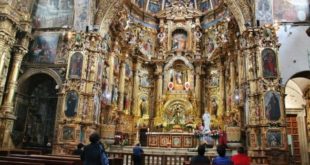 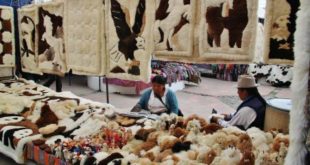